The CEO of Sony’s Semiconductor division claims that smartphone cameras will exceed the quality of single-lens reflex cameras within the next few years, specifically by 2024.

As reported by NikkeiSony recently held a business briefing session for its Imaging and Sensing solutions where Terushi Shimizu, President and CEO of Sony Semiconductor Solutions, said that he and his division expect the image quality taken with smartphones to surpass that of those taken by single-lens reflex cameras by 2024, a claim mirrored by presentation materials.

“We expect that still images will exceed the image quality of single-lens reflex cameras within the next few years,” he says.

He argues that this will be possible thanks to the quality of photos that can be achieved by combining its sensors, larger apertures, and computational photography technology.

Associated presentation materials point to Sony’s belief that higher performance camera systems are being developed that are increasing the sensor size and combining that with better image signal processors (ISP) in high-end smartphone models — Sony expects the average size of high-end sensors to double by 2024. These two factors together with what it calls “quantum saturation” and artificial intelligence processing (computational photography), Sony believes that interchangeable lens cameras (ILCs) will be left behind by smartphone technology. 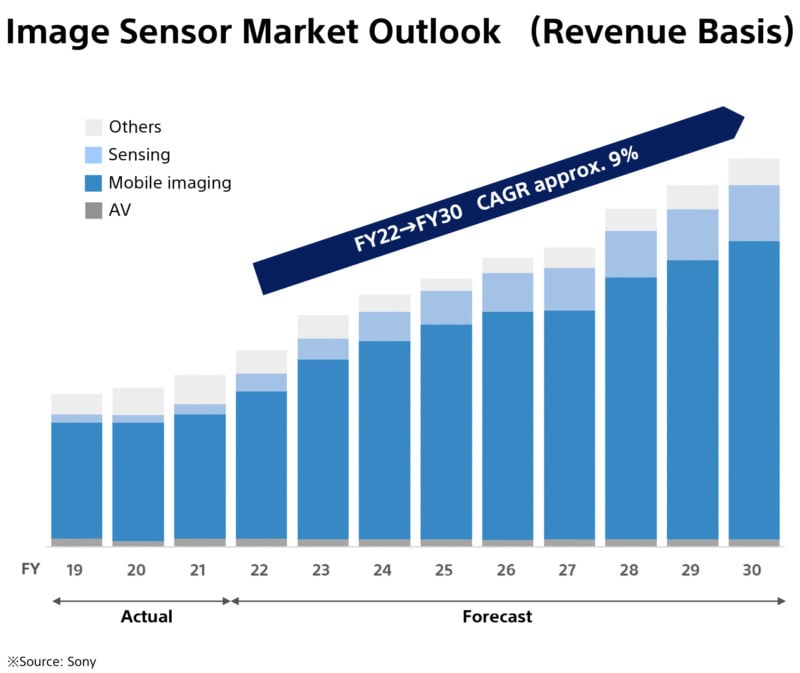 Sony’s predictions for the smartphone space don’t end there. BY 2025 it expects smartphones to see a jump in high-speed video performance, more megapixels, and better autofocus performance. This includes an “evolution” in video performance including high-speed readout that supports 8K video, multi-frame processing for better HDR, and more powerful AI processing. Sony also believes that by using distance information, presumably through time-of-flight sensors or LiDAR, focus will become easier, faster, and more accurate. 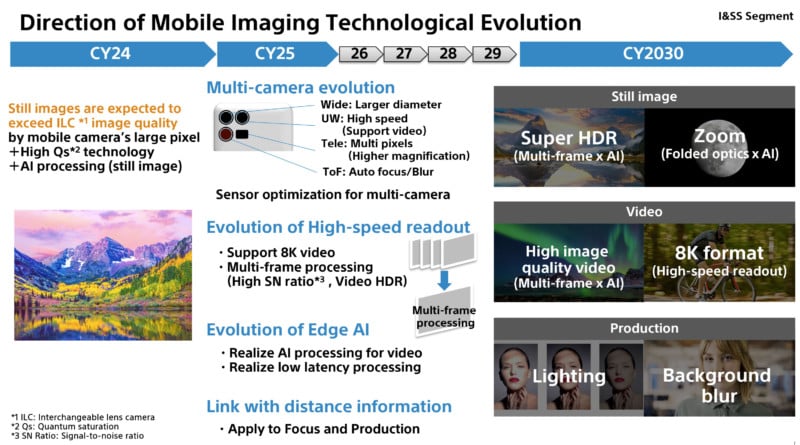 By 2030, Sony expects smartphones to fully embrace folded optics, otherwise known as periscope lenses, while also continuing to advance AI processing to make for high-quality photos. On that note, Sony recently pioneered a fully zoomable periscope lens in its Xperia 1 Mark IV smartphone. The company also seems to believe 8K will become a standard and that digital manipulation of background defocus — bokeh — and lighting will be possible in photos and video.

As to be expected, this belief in the expansion of photo and video performance in smartphones has led Sony to continue predicting sales growth in its mobile imaging sector as sensor sizes are getting larger and driving the market.

High-quality smartphone cameras are already coming to market. Samsung, for example, recently showed off its 200-megapixel smartphone sensor by printing a high-resolution photo as big as a building. The sensor itself isn’t what is holding back smartphones as far as quality, though. That is a problem of optics, which is exemplified by the fact Samsung’s photographer mounted a full-size lens to that tiny smartphone sensor in order to take that large photo. Periscope lenses will go a long way to addressing the physical limits of smartphone optics, though, so it is possible that a lot can change in the next two years as Sony predicts.