With the rumors heating up that Brad Pitt is dating newly single Emily Ratajkowski, sources close to the couple are starting to talk. And oh boy, are they blabbing some juicy details about what the 58-year-old Oscar winner reportedly thinks about the 31 -year-old actress!

Even though the dynamic duo has only been on “a couple of dates” that they’ve kept “on the down low,” an insider in Pitt’s camp has a message for Ratajkowski (and it’s a very flattering one). “He thinks she’s the hottest thing on the planet and they totally gel.” they shared with Life & Style. That’s quite a big statement for a relationship that’s in its very early stages, but the source notes that so far, “they’re having fun.”

The Gone Girl star recently filed from divorce from husband Sebastian Bear-McClard after he reportedly cheated on her “multiple times” during their four-year marriage. She isn’t sitting at home crying about her ex, though, according to her friends. “Emily isn’t ‘t going to have any problem moving on with her life from Sebastian. She’s completely over him,” a second source told the publication. Right now, it appears that moving on means a date or two with Pitt, who is also dealing with an ongoing divorce from Angelina Jolie.

Even though he and Jolie were declared legally single in 2019, their tumultuous battle continues in court over lingering child custody issues, and their Château Miraval winery in France. So, perhaps Ratajkowski is the exact distraction Pitt is looking for right now — a night out on the town and “​strictly dating for fun.”

Before you go, click here to learn more about celebrities who’ve opened up about dating after divorce. 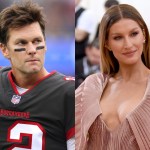