Neil Gaiman used a scene from the newly released Netflix series adapting his celebrated Sandman comics to demonstrate why Kirby Howell-Baptiste plays the usually white-as-snow Death of the Endless and why he approves of the casting.

The scene is a three-minute clip isolated and posted to YouTube by IGN which Gaiman shared on his Facebook page. If anyone out there is wondering why I cast Kirby Howell-Baptiste as Death, this clip from Episode 6 is here to show you why…” he writes.

In the scene, Death and Dream (Tom Sturridge) enters the home of Harry, an elderly man who is seen playing a fragment of Franz Schubert’s ‘Unfinished Symphony’ on the violin. Seeing them, he stops and greets his guests. Death is okay with him continuing, but he remarks that the Austrian composer never finished the composition.

Soon bemused by how Death knows him, it dawns on the elderly gent who she is and why she’s there. his time is up. The man is obviously not ready to go so, humble and kind with his assignment, Death allows him to pray one last time.

Harry prays the Shema (or Shema Yisrael) in Hebrew and English. Found in Deuteronomy 6:4, the prayer goes “Hear, O Israel. YHWH [Yahweh] is our God, YHWH is one,” and is a nightly/morning prayer that encapsulates monotheistic Judeo-Christian belief.

Dating back to Biblical times, it was commonly recited then including by Jesus. “I’m glad I said the Shema,” Harry says. “My old man always said it would guarantee you a place in Heaven.”

The scene is derived from an incident in the Vertigo Comic and it plays out almost the same as on the page with a few exceptions. Aside from how different Death looks, Harry has facial hair and a yarmulke in the issue. He also lays on a couch in a dingy apartment as opposed to the chair and condo-like confines in the clip. 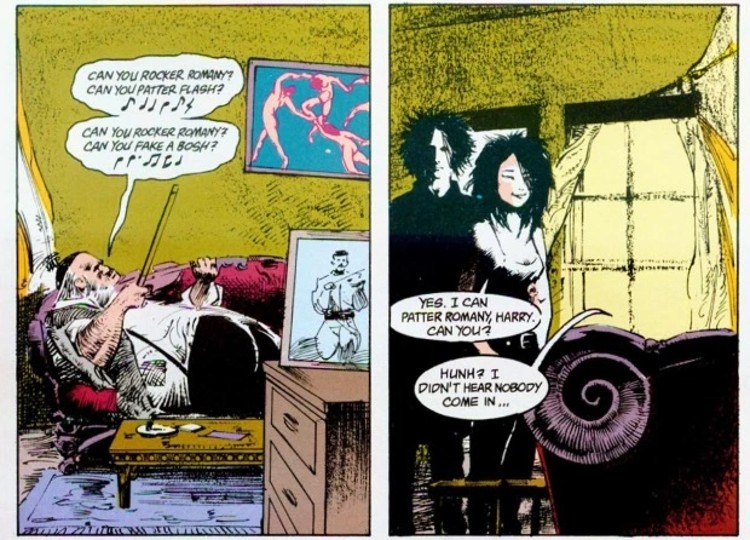 Reactions to Harry’s last moments being brought to life in 4K are mostly positive in the comments of Gaiman’s Facebook post and IGN YouTube video. Some were brought to tears by the sequence’s poignancy and they are approving of Howell-Baptiste’s portrayal of Death.

You’ll see more of her if you have a Netflix subscription as all ten episodes of Sandman’s debut season are now streaming. If you took the opportunity to watch, let us know what you think of Kirby Howell-Baptiste’s performance and the adaptation as a whole.